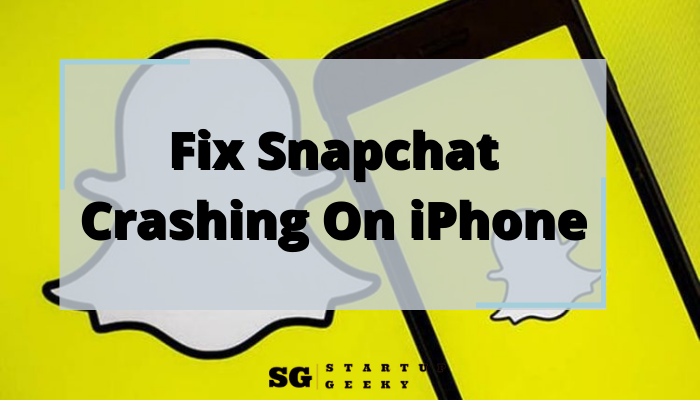 Does the Snapchat app keep crashing on your iPhone? If yes, then here are some hacks we’ve figured out to bring the social networking app back on track.

The crashing issue has haunted Snapchat for a long time, with a large number of users often complaining about the repeated crash out of the app. While some state that Snapchat keeps crashing on iPhone right after launch, others report that the app tends to get frozen while being used and automatically quits.

Either way, it’s rather frustrating and needs an immediate fix.

Apps crash in mobile devices is usually tied to low memory or other types of memory issues. Other factors that can be considered as culprits would include other rogue apps, faulty updates, as well as malware. All these can result in an app getting corrupted, thus becoming unstable and that could be the reason why Snapchat connectivity issues occur.

What causes Snapchat to crash on iPhone?

Snapchat crashes on iPhone are usually a result of incompatible versions. While apps such as Snapchat are usually updated automatically, the iOS version running on iPhone is not auto-updated.

The latest versions of Snapchat will sometimes not be compatible with the outdated iOS version running on your iPhone. This leads to constant closing or crashing every time you try to launch the app.

Snapchat may also crash on your iPhone due to server downtime. In such cases, Snapchat users are notified via their various social media handles. To ascertain whether the crash is caused by server downtime, you can check the status of Snapchat servers on Google. However, server downtime or crashes are pretty rare.

Also, if you’re using a VPN and have troubles with Snapchat on your iPhone, the VPN connection could be causing the crash.

Here are various ways to help users in order to troubleshoot Snapchat’s repeated crashing problem and fix the problem.

For iOS 12 and earlier users proceed as follows.

After updating Snapchat and you notice it’s still crashing, check out the next solution.

Also, read What Does “User not found” Mean on Instagram? – Here is a complete solution

Fix 2. Check whether iPhone software is up to date

You need to check whether your iPhone is running on the latest released iOS. To verify that your iPhone software is up to date:

Fix 3. Delete Snapchat and Reinstall It

Deleting the app clears cache and data that may be conflicting, causing the app to crash randomly. On iOS, the only way to clear cache and temporary files stored on the app’s memory is by uninstalling the app.

Deleting Snapchat and re-installing the latest version from Apple’s App Store is likely to solve the annoying crashing problem. Follow the steps below to delete your Snapchat account on your iPhone.

For iOS 12 or earlier versions, follow these steps to delete the Snap app on your phone:

For iOS 13 and later versions, you can delete Snapchat by following the steps below:

After deleting Snapchat, the next step is to reinstall it. Reinstalling the app is pretty much the same across all iOS versions.

After reinstallation, open the Snapchat App and enter your initial Snapchat username and Snapchat password. Check out the next possible solution if the problem still persists.

Force-quitting and launching Snapchat on your iPhone could be an eminent step towards fixing the crashing issue. To force quit and relaunch Snapchat on iPhone, proceed as follows.

Fix 5. Disable VPN on your iPhone

Try deactivating the VPN service as it might be interfering with Snapchat’s internet connectivity.

If you can’t solve the issue after trying all the solutions above, contact Snapchat Support or visit the Snapchat help center website to report the issue for further assistance and recommendations. Also, verify and ensure that your Snapchat account has no issues and that you’ve entered the correct account credentials.

This is a must-do if you have multiple Snapchat accounts, are prompted with login errors, and aren’t sure of the account information or login details to use. Relay any error messages or codes you see while attempting to run Snapchat as these will serve as clues on what went wrong and what needs to work on to fix the problem.